Cecilia Payne (ref wiki), now considered the founder of modern astronomy, could not get even get her Bachelor's degree in 1919 because Cambridge did not confer degrees to women. She travelled to US to join Harvard because in England she could only become a teacher since she was a woman. She had to declare her Doctoral results to be "of course not real" because her guide/mentor at Harvard thought she was wrong.

Today her brilliance is recognized by astronomers around the world (read thesis summary). She showed how to decode the complicated spectra of starlight in order to learn the relative amounts of the chemical elements in the stars. She discovered, surprisingly, that the Sun and the other stars are composed almost entirely of hydrogen and helium, the two lightest elements. Before her discovery the popular belief was that if the Earth’s crust were heated to the temperature of the Sun, its spectrum would look nearly the same.

It is because of her that we know what distant stars and planets are made of , even before setting our foot on them or sending probes. This makes our space missions more predictable and less risky and our knowledge about the universe more complete. Also before we discovered the way stars acted as atoms factory (read more) we needed to know that stars were only made of hydrogen and helium, the latter being a by product of fusion (read more).

From the time she finished her Ph.D. through the 1930s, Payne advised students, conducted research, and lectured—all the usual duties of a professor. Yet, because she was a woman, her only title at Harvard was “technical assistant” to Professor Shapley.

It took 26 years for her to become a full professor (the first woman so recognized at Harvard) and chair of the Astronomy Department and another 20 when her fellow astronomers finally appreciated her genius. In 1976, the American Astronomical Society awarded her the prestigious Henry Norris Russell Prize.

Through her hard work and passion, she paved a path for all the future astronomers by advancing human knowledge and made it possible for women to hold posts in academia . This is why she exemplifies what is good and great in the "Human Spirit". 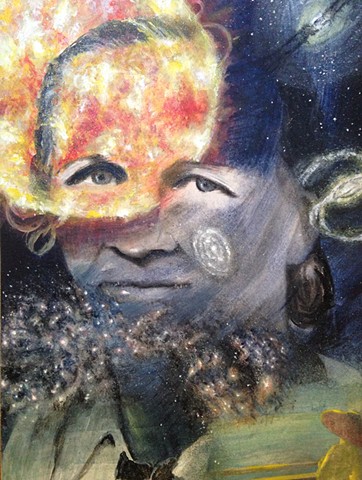 Cecilia Payne: Explorer of the Stellar Atmosphere
Acrylic on Canvas
14" X 11"
$400
< previous next >