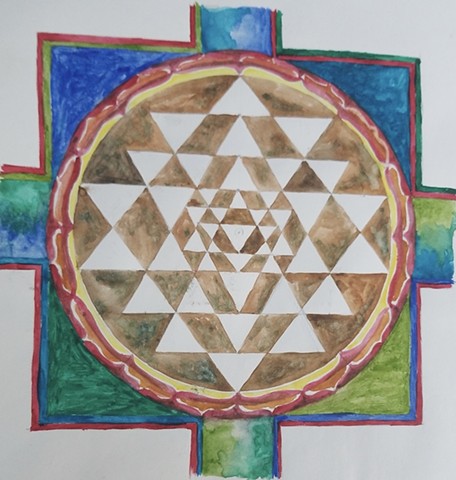 The Shri Yantra, the oldest form on Mandala, almost 10000 years old. Sri Yantra, or Shri Chakra is a form of mystical diagram (yantra) used in the Shri Vidya school of Hinduism. It consists of nine interlocking triangles that surround a central point known as a bindu. These triangles represent the cosmos and the human body. Because of its nine triangles, Shri Yantra is also known as the Navayoni Chakra.[1] When the two-dimensional Shri Yantra is represented in three dimensions, it is called a Mahameru. Mount Meru derives its name from this shape. In addition to Mount Meru, all other yantras derive from the Shri Yantra